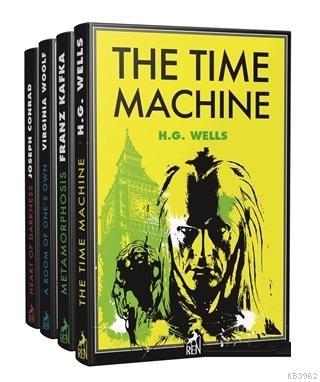 Why don't I keep sleeping for a little while longer and forget all this foolishness.

One of Kafka's best-known stories, The Metamorphosis was first published on 1915. In the story, a salesman named Gregor Samsa wakes up and finds himself transformed into a huge insect. In this novella, along with his successful use of allegory, Kafka points out one of the major problems of modern individual: alienation. Even if the story sets in absurd, irrational universe, we, as the reader, can easily associate ourselves with the similar signs that we concern deeply.

Heart of Darkness, a short novel written by Joseph Conrad on 1899, helps us to see the consequences of imperialism through the concept of race and discrimination. Successfully indicating how European colonial exploitation inflicted upon African natives, the work has its own characteristics to be a reference to the social sciences, as well as an inspiration the great people of literature.
Inspired by his days as a sailor, Condrad makes his character, Marlow take journey to the Congo River in Central Africa, and experience the brutal attitudes of European colonists in the name of their cruel quest for ivory; a journey akin to the one into the darkest and deepest recesses of human nature.

H.G. Wells, the pioneer of science fiction genre, even if he lived long ago, is still considered as a genius with his timeless works. The Time Machine, published on 1895, is the progenitor of 'time travel' subgenre.

In the novel, a scientist is hurtled into the year of 802,701 where he meets the future race. By building a setting nearly a million years in the future, where utopia transforms into a dystopia, Wells pushes the limits of human imagination with his political and philosophical approach. The Time Machine is a classic that everyone should read who enjoys the science fiction and fantastic literature.

A Room Of One's Own

Lock up your libraries if you like; but there is no gate, no lock, no bolt that you can set upon the freedom of my mind.

As Virginia Woolf's most powerful and pioneer feminist essay, A Room of One's Own focuses on the subject going on over the centuries: woman and literature. In the book, based on a lecture given at Girton College, Woolf lays emphasis on the male-dominated literary world and invites both women and men to consider upon this inequality. Why is there no genius like Shakespeare among the women? Why do we not see female authors as much as male authors? Why can't women become free?

All in all, Woolf puts forward this thesis which has become a principle even in our days: A woman must have money and a room of her own if she is to write fiction.